Many producers were planting 50,000 agave plants per year on 25 acres (10 hectares). We decided to plant 100,000 agave plants so as to have more agave shoots in the coming years to continue our planting. Danny received help from one of the other agave growers as to the process of planting the agave. First we had to pick and measure the fields we wanted to plant. Then we have to improve our driveway into the property and build roads into the fields. We are talking about rough limestone ground with a thin layer of soil. They used dynamite to break up deposits of fine limestone and we also purchased truckloads of limestone and the mayan crews hand-filled in holes with rocks and then put down a layer of limestone powder. Even with such a think layer of soil when the rains come there were low spots that can stop even 4-wheel drive vehicle. We work on improving these roads every year. 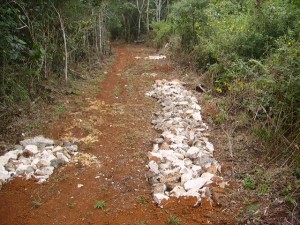 Filling in the road with limestone rocks 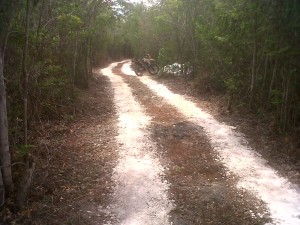 The next step was to slash and burn the 2 fields we had surveyed. This is quite involved because first you have to look at when to burn. During the summer rains it is too wet. During the spring it can be too dry and dangerous. We had a dry spring but were able to safely slash and burn our fields before any summer rains started. First we thought we shouldn’t be slashing and burning but mulching. Then we found out about biochar and that this old farming procedure was actually good for the ground and the environment. 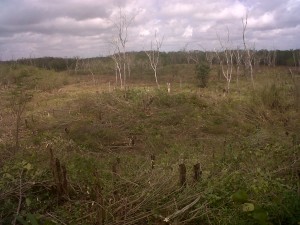 Field slashed to prepare for burning 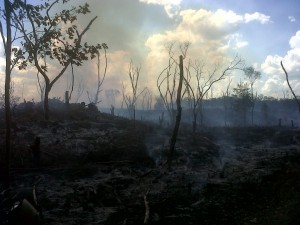 Field burned in preparation for planting the agave

Then we had to purchase the plants and truck them to our fields. 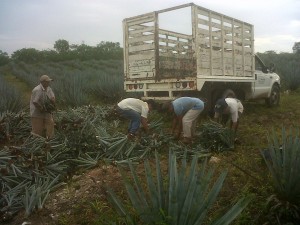 Gathering agave plants to truck to our new fields 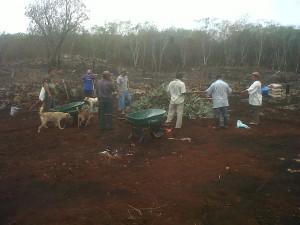 Then our mayan crews took rope with knots every meter, stretched it out over the land where we wanted our rows and planted an agave plant at each knot. 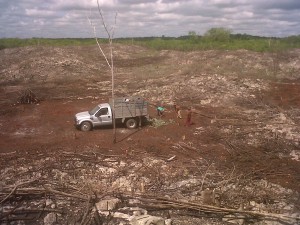 Getting ready to plant agave 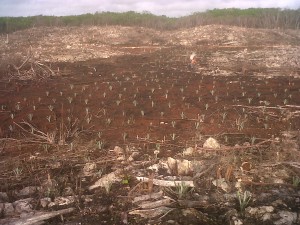 Rows of agave plants in flat and on knolls

However, as you can see from the pictures, this only has a few flat fields full of soil. Our area consists mostly of small knolls of limestone rock. So when the knot is over a large rock you would think they would move where they plant that agave. But no, they take some soil and rocks and make a little planter on top of the tock and plant the agave. I was amazed. But I checked other agave fields and there were such plants that had found a way to get their roots through/around/on the side of the large rocks and were growing just fine. We were trucking in plants and had a crew of 20 Mayans planting, trying to beat the coming rains. We were very lucky! The rains held off until almost all of the plants were in and then the edge of a hurricane came through and it rained 8 inches in 2 days!