History leading up to the beginning of the agave project

First let me say that I have never run an agricultural business, never raised a herd of sheep, never had a business in a foreign country where I don’t know the customs and language (although we worked forf seven years in western Europe conducting our Feldenkrais Method® practice organizing intensive series for children with special needs and conducting workshops). But Mexico is totally new to us.

So how could we get involved in such an enterprise? A little history first. We already had purchased a 400 acre rancho with the Mayan name of “Kanum” 30 minutes south of the small city of Valladolid. We planned to develop our personal paradise at Kanum for our retired years. 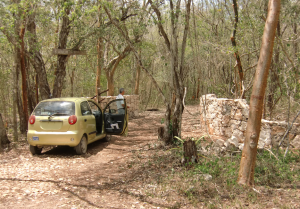 We purchased this piece because of the cenote in the center. 70 feet down a 10 feet hole in the ground is a large pool of water. The depth of the water is still unknown but over 100 feet deep. I designed a spiral staircase that I wanted as the access into the cenote. I asked around and was connected to Daniel Oseguera by email. He fulfilled two requirements: one he spoke excellent engllish and secondly he is a creative and experienced builder and has much experience with cenotes. So we finalized the design on email and during our trips down to the Yucatan we watched the staircase being build. There is a platform at the top with 4 cables that hold a platform right above the water. There are 70 steps of a spiral staircase that connect the two platforms. The cenote hole is small and only a little light filtered down to the water. I do have some pictures going down the spiral staircase and from the lower platform which I will post soon. 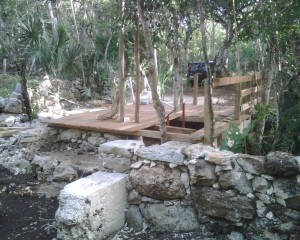 Then we had a solar company come in and set up a solar water system with a tank on a little hill to be able to water our planned orchards. 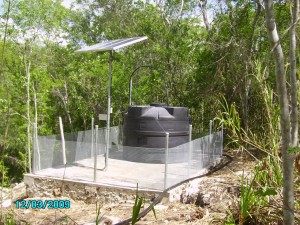 We also found a sink hole where we planned on building a pond and stocking it with talapia fish.

Then one day we passed Danny on the rural road near our land and found out that the piece of land behind ours, with the Mayan name of Susula, was suddenly available for sale again. We ended up purchasing Susula which is 550 acres. Our two pieces are contiguous in the back but have separate entrances on the town road. Susula has about 300 acres of fields, ones that the Mayans have planted with corn over the years and the land was starting to grow back into forest. I had no idea what we would do with this new piece of land! 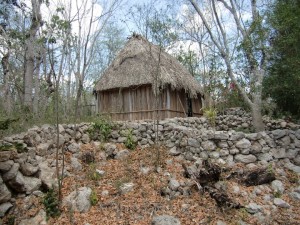 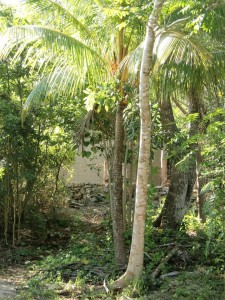 Trees next to Susula palapa

The following year Danny came to us to tell us about what 2 local businessmen were doing with agave. They had been planting agave for years and had sheep herds to help with the weeding. Both were planning to build distilleries in a few years, when their crops were ready for production, and to distill the crops for other local agave growers in the new agave association. We looked at all the numbers and what would be involved and decided to go ahead and plant agave on some of our fields. Agave is a desert plant and grows during the summer rains and does not need to be watered. 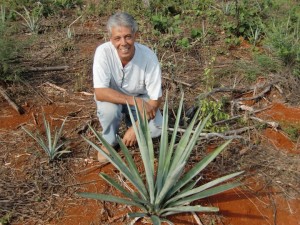 Danny next to one our young agave plants